Posted on December 18, 2010 by dienanhso
Ashley Yao is one of those models who makes a decent living without doing runway shows or starring in tons of magazine editorials. She has been doing mostly catalog jobs, which pay really well, thank you very much. A constant in JCrew catalogs, she is also a singer in a band called, Misha.

This is a L’Oréal ad for the Féria Hair Color line. Ad campaigns tend to pay really well because they run in more magazines than a single-print editorial. In addition, the ads can run for months or sometimes, years and those residual incomes do add up over time. 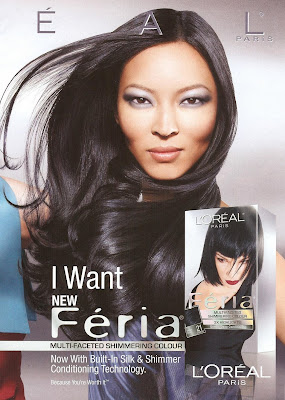 Source: Scanned by me