Posted on December 18, 2010 by dienanhso
Finally, we see an Asian/Japanese model (Rila Fukushima) in the pages of Nippon Vogue, albeit it is in one of the smaller, minor editorials for the October 2008 issue. Nippon Vogue is not known for using Asian models on its pages, either on the covers or in editorials. It has consistently used Caucasian models in almost every feature except the local gossip columns and society pages.
Korea Vogue, on the other hand, rarely feature non-Korean Asian models on its editorials either. I guess we can at least applaud it for using its own people to fill the pages but I would love to see it feature other Asian models of non-Korean nationality. Ditto with India Vogue. 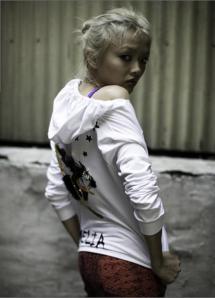